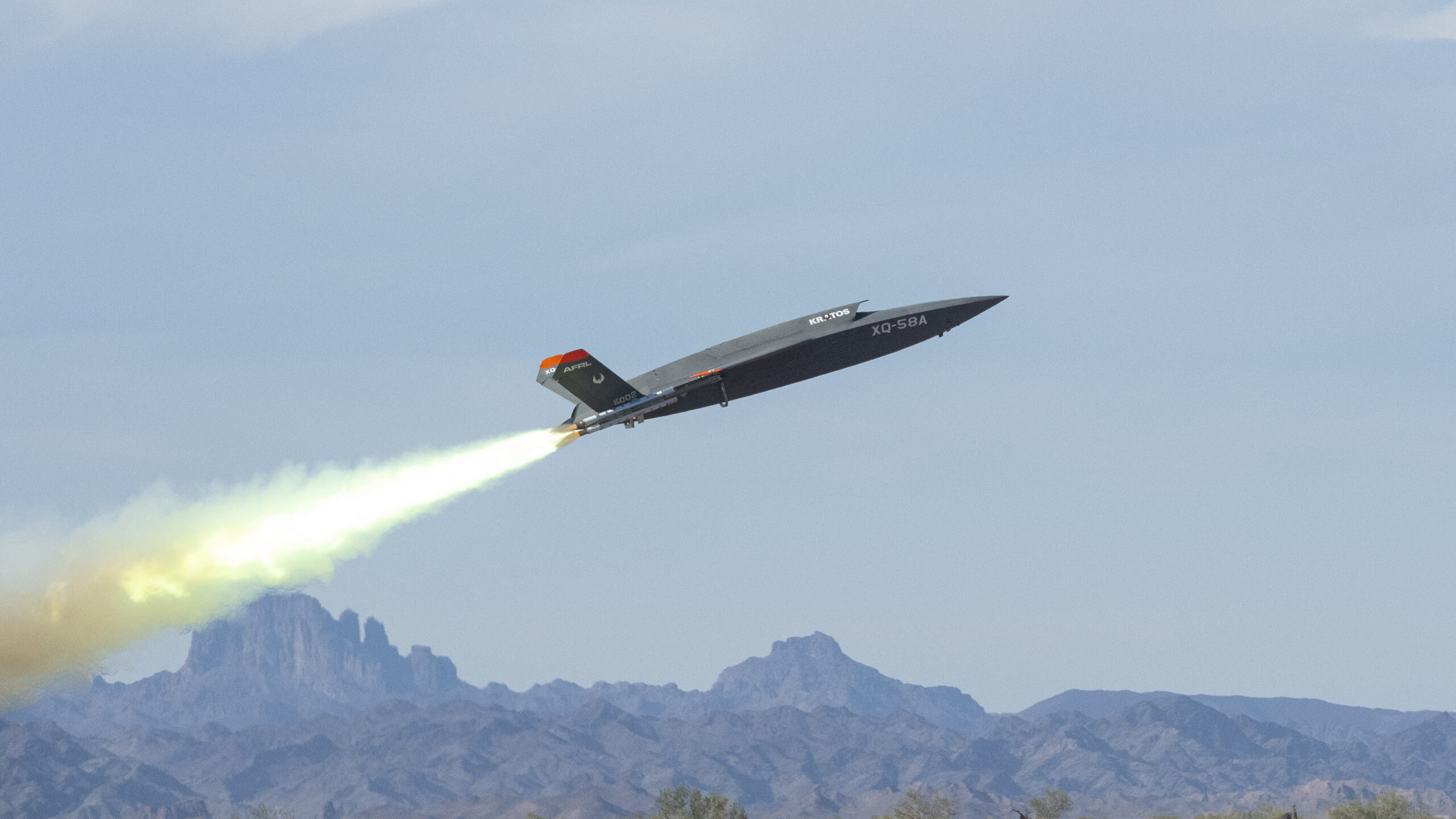 WASHINGTON — As the Air Force considers starting a program of record for autonomous drone wingmen to fly alongside next-generation fighters, the service is tapping one of its test squadrons to begin regularly flying the Kratos XQ-58A Valkyrie.

The 40th Flight Test Squadron at Eglin Air Force Base, Fla., has taken ownership of the first of two Valkyrie drones to be delivered to the unit, with the inaugural flight of the aircraft set to occur by the end of this month, the Air Force said in a Wednesday news release.

Basing the Valkyrie at Eglin, which boasts a test range that spans about 100,000 square nautical miles of airspace overlying the Florida panhandle and Gulf of Mexico, according to the Air Force, will allow the service to evaluate the drone’s ability to autonomously operate over vast distances, Maj. John Nygard, the squadron’s autonomous aircraft experimentation team lead, said in the release.

Because the Air Force doesn’t have experience flying autonomous drone wingmen as part of normal flight operations, test pilots and maintainers from the 40th Flight Test Squadron will be responsible for figuring out the logistics and infrastructure needed to house and operate the Valkyrie, Nygard said.

Their findings will be recorded and could inform “resource requirements that could be used for future combat collaborative aircraft,” he said.

In September, Air Force Secretary Frank Kendall said the service could begin a Collaborative Combat Aircraft (CCA) program as early as fiscal 2024, which would seek to field one or more autonomous drones capable of operating with the fifth generation F-22 and F-35, as well as a part of the Next Generation Air Dominance (NGAD) family of systems. NGAD is slated to feature a crewed fighter and will replace the F-22 in the early 2030s.

“The expectation is that these aircraft can be designed to be less survivable and less capable, but still bring an awful lot to the fight in a mixture that the enemy has a very hard time sorting out and dealing with,” Kendall said. “You can even intentionally sacrifice some of them to draw fire, if you will, to make the enemy expose himself.”

The XQ-58A is one of the autonomous drones the Air Force Research Laboratory is exploring for its Low Cost Attritable Aircraft Technology (LCAAT) and Skyborg technology development efforts. A rail-launched aircraft with a 30-foot wingspan, the Valkyrie does not need to be manually piloted in order to perform flight maneuvers, and can instead be controlled using commands given by a ground control station or nearby fighter jet.

Since 2019, AFRL has carried out Valkyrie test flights at military installations such as Yuma Proving Ground in Arizona. However, officials have said more regular testing will be needed to mature Valkyrie and other drones to be fielded in the mid- to late-2020s — the timeline offered by Air Force leaders.

“The data generated during previous tests, along with feedback provided from our user community, show that in order to rapidly develop and mature tactical autonomy on an appropriate timeline, investment in — and utilization of — appropriate military range resources is required,” said Matthew Niemiec, the Air Force Research Laboratory’s autonomous aircraft experimentation portfolio lead.

Eglin AFB’s Valkyrie aircraft could host “a variety” of autonomous cores that dictate the performance of the drone, such as the government-owned Skyborg autonomy control system, as well as others created by defense contractors or academia, the Air Force said. The base will be equipped with a new simulation environment that will provide a feedback loop for XQ-58A users to weigh in on how different autonomy software is performing.

“The goal by fall 2023 is to leverage this platform for experimentation with crewed-uncrewed teaming display solutions,” Nygard stated. While the news release didn’t elaborate on what these “crewed-uncrewed teaming display solutions” would involve, they could potentially lay the groundwork for Valkyrie to begin flying under the control of a fighter pilot in an airborne jet.

Kendall has said the Air Force fighter pilots need to be able to experiment with potential CCA options, which include the Valkyrie, Boeing’s MQ-28 Ghost Bat and General Atomics’ MQ-20 Avenger, so that they develop trust in unmanned systems and learn how to incorporate the drones in daily operations.

“You’d be integrating these [drones] with existing aircraft in a way which sort of prove out some of the tactics, techniques and procedures, as well as things like maintenance concepts …and organizational structures,” he said in September.