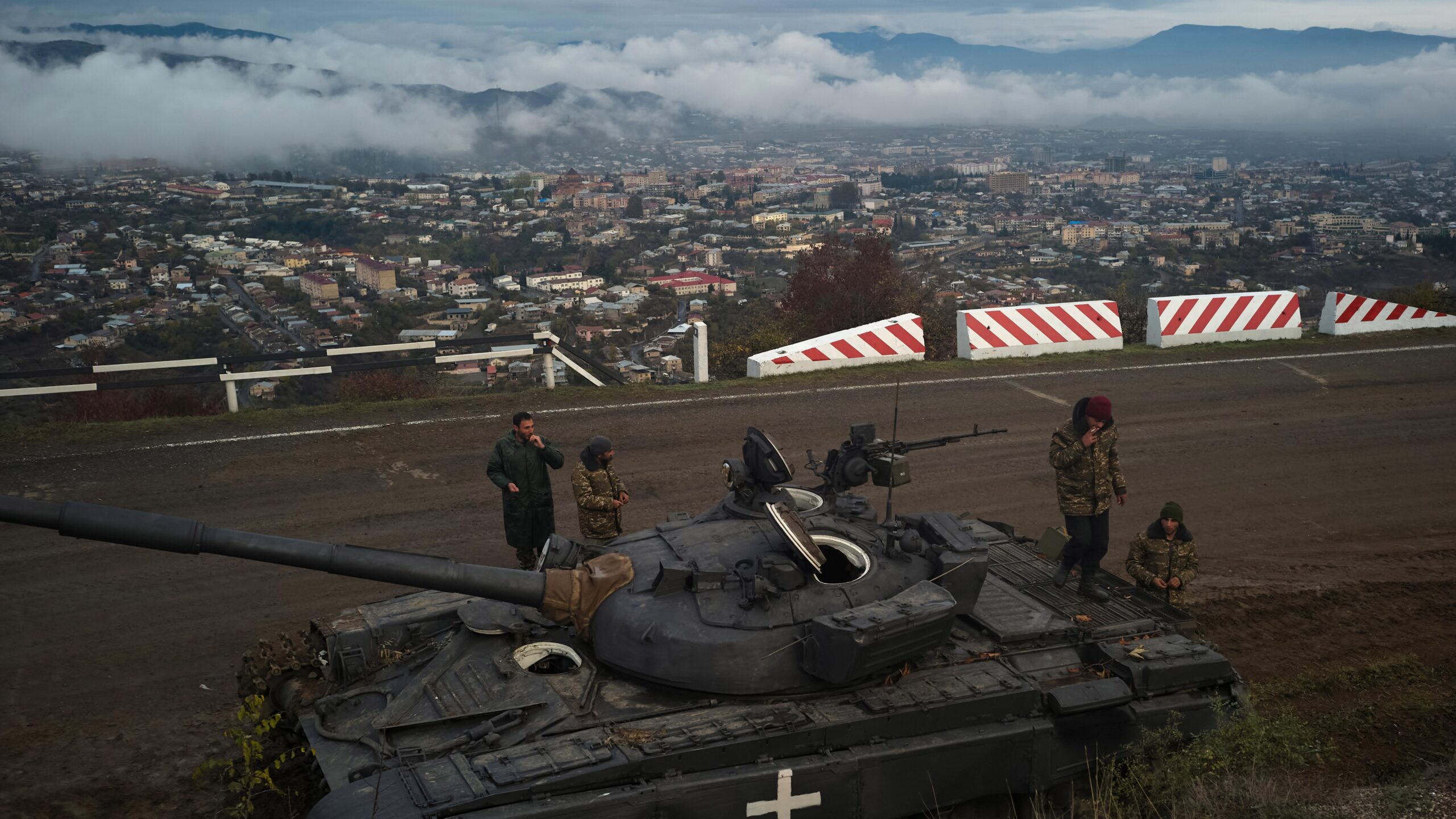 Soldiers keep guard by the side of the road where the final days of battle had occurred between Armenian forces and approaching Azeri forces several day before, on November 13, 2020 in Stepanakert, Nagorno-Karabakh. (Alex McBride/Getty Images)

TEL AVIV — Since the start of the Ukraine war, Israel has been careful to make sure its domestically produced weapons were not used against Russian forces, as part of an ongoing balancing act with Moscow over air space in Syria. But the unexpected, renewed fighting between Azerbaijan and Armenia on the Nagorno-Karabakh area in recent days is raising eyebrows in Jerusalem.

Azerbaijan is a reliable military customer of Israel, while Armenia’s primary military backer has traditionally been Moscow. And clips of Israeli weapons taking out Russian-made equipment is raising concerns in Israel that, as one Israeli defense source put it, Russia will have “big anger” over seeing their defensive equipment exposed.

Israel has been careful to manage its relationship with Russia due to Jerusalem’s need for the ability to safely strike inside Syria against Iranian-backed forces. There is a tacit understanding between Israel and Russia that Russian forces will not fire on Israeli jets and vice versa — although Moscow has occasionally made threats in the past to remind Israel not to get involved in Ukraine.

The Israeli Ministry of Defense declined to comment on any issue related to the renewed Azerbaijan-Armenia conflict, which has already claimed 155 lives of troops on both sides, raising concerns of potentially more intense hostilities. It represents the largest fighting between the two sides since 2020. (Politico reported today that US Speaker of the House Nancy Pelosi will travel to Armenia this weekend, more proof that the politics of the region are best described as messy.)

Exactly how Russian President Vladimir Putin might respond, however, isn’t clear, Israeli sources acknowledge. Were he to threaten Israel jets above Syria, it would be a challenge but not shut down Israeli operations in that country; the Israeli forces would likely switch more to stand-off weapons launched from the Golan Heights area as opposed to close-in air strikes. However, longer-distance strikes are less reliable, and with the Iran nuclear deal still very much up in the air, Israel is looking to keep pressure on Tehran’s proxy forces wherever it can.

RELATED: Israel may be looking to strengthen ties to Azerbaijan as an Iran counter

The bigger concern would be if the situation escalated, and Russia moved to send forces into Armenia. In such a situation, Russian forces being killed by Israeli-made weapons would be on the table. However, given how stretched Russia’s forces are in Ukraine, it seems unlikely any mass force of Russian troops would be shipped to  Nagorno-Karabakh. Whether Russia could even send more equipment to reinforce Armenia is unclear, given the supply-chain issues Moscow is facing; that calculus may have played a role in Azerbaijan’s decision to restart the conflict.

Moscow wanted to keep a new flare-up in Nagorno-Karabakh from happening again, said Giora Eiland, a retired major general and former head of the Israeli National Security Council. but “this effort failed because Russia is now weak due to the ongoing war in Ukraine.

“This, in my opinion, was the reason for the renewed hostilities,” he told Breaking Defense. “This is also a reason for concern in Israel as Russia is being hit in Ukraine and now Israeli weapon systems defeat Russian systems in the war between Armenia, Russia’s ally and Azerbaijan.”

And while Israeli systems have been deployed by Azerbaijan against Russian systems in Armenia before, the Ukraine situation means “the situation is totally different” in terms of how sensitive Moscow may be to perceptions of its equipment being toppled on the battlefield.

Among the weapons known to be in use by the Azeris: the aforementioned Harop; the Elbit systems SkyStriker loitering weapon system; IAI’s Lora, a long-range precision missile; and Israeli-produced Hermes-900 reconnaissance UAVs. All of this was used visibly by the Azeri forces in the 2020 conflict.