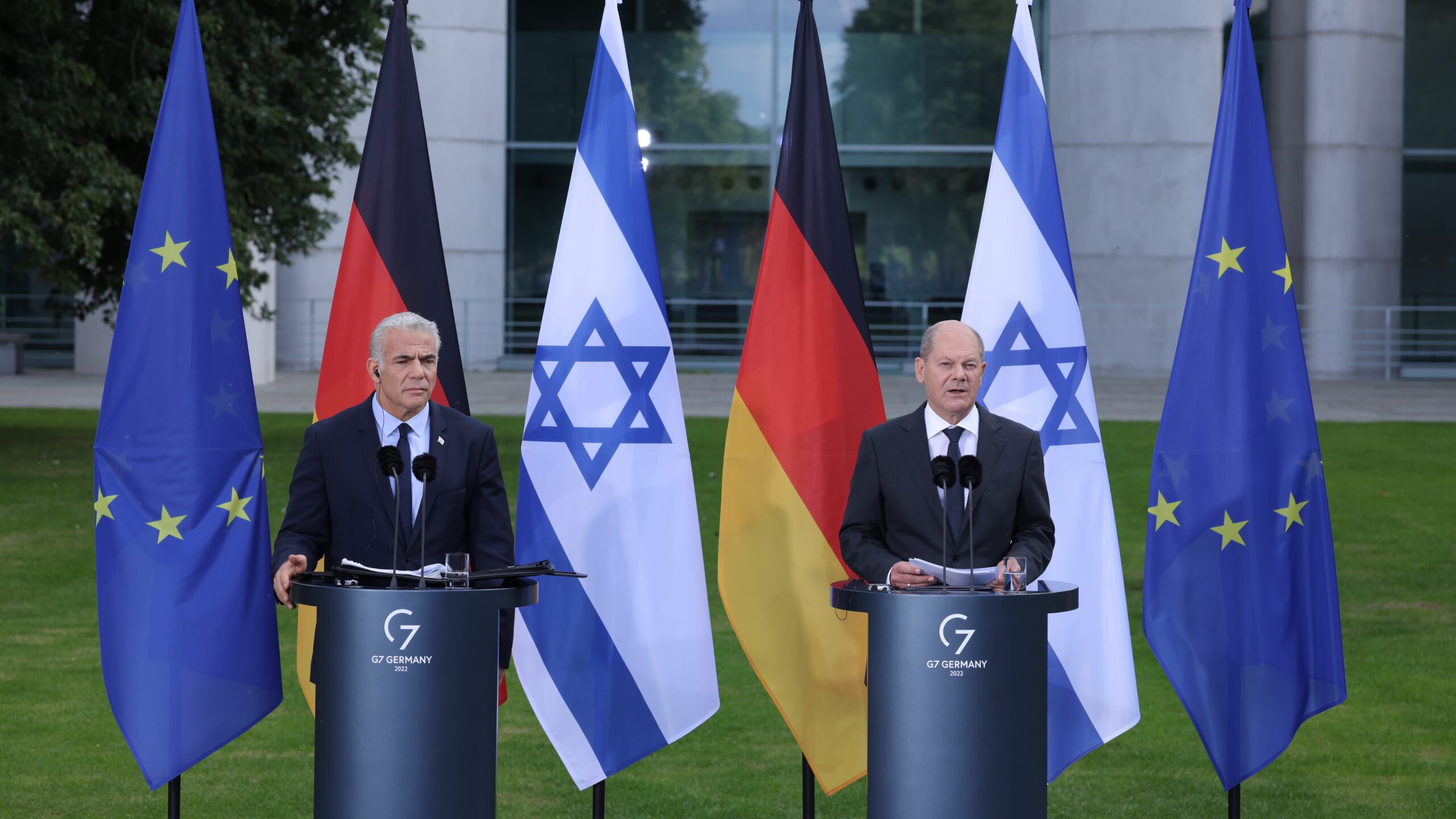 German Chancellor Olaf Scholz (R) and interim Israeli Prime Minister Yair Lapid speak to the media following talks at the Chancellery on September 12, 2022 in Berlin, Germany. The two are in discussions about the purchase of the Israel-made Arrow 3 missile defense system. (Photo by Sean Gallup/Getty Images)

PARIS — The former commander of the German Air Force has confirmed that Germany intends to buy the Arrow 3 air defense system from Israel, as a central part of what German Chancellor Olaf Scholz has described as a pan-European air defense network

In a telephone interview on Sept. 12 with Breaking Defense, retired Lt. Gen. Karl Müllner said the choice had been set and confirmed at a defense conference in Koblenz, Germany, two weeks ago.

Discussions about buying the Arrow 3 system have been reported by both German and Israeli media since early April. But Müllner said the decision is already more or less “set,” confirming a report from Reuters on Sept. 12.

The most important issue in the area of air defense is not “short-range air defense, the army’s air defense or even modernizing the Patriot missile system. It is [ballistic] missile defense,” writ large, Müllner said.

In an Aug. 29 speech at Charles University in Prague, Scholz laid out a vision of Germany at the heart of a pan-European air defense network, stating “we have a lot of catching up to do in Europe when it comes to defense against airborne and space-based threats” — something Müllner said was most likely driven by the threat from Russia’s Iskander missiles based in Kaliningrad, just 328 miles from Berlin.

Germany “will be investing very significantly in our air defense over the years ahead. All of those capabilities will be deployable within the framework of NATO,” Scholz continued in Prague. “At the same time, Germany will, from the very start, design that future air defense in such a way that our European neighbors can be involved if desired — such as the Poles, Balts, Netherlanders, Czechs, Slovaks or our Scandinavian partners.”

However, a number of these countries have been making their own air defense arrangements for years, and several have stepped up procurement plans over the summer in the wake of Russia’s invasion of Ukraine:

But Müllner said, the Chancellor “doesn’t have in mind a political project because you always have to compromise and it will take longer, so this program will be decided nationally. But at the same time others are invited to participate.” He explained that participation from the neighbors in question “could range from decision-making procedures in NATO to financial participation or even buying their own missiles. It all depends on what they think both politically and militarily.”

Doug Barrie, a senior fellow for military aerospace at London’s International Institute for Strategic Studies, told Breaking Defense that there was “a lack of clarity” in the announcements, remarking that if the Arrow were a short-term, albeit very expensive fix at around $2bn, “it would still be less expensive than losing something strategic.”

“How does all this fit together? It’s like a jigsaw puzzle with pieces either missing or in the wrong place,” Barrie said, adding that “Berlin doesn’t have a fantastic history of clarity on land-based acquisitions.”

Müllner explained that the capability gap in Germany’s air defense had its roots in that “10-12 years ago nobody really thought about a war with a peer enemy. The planners at MoD were focused on Afghanistan-type conflicts and never thought about war against an enemy with reasonable air capability. But now is a totally new situation and it’s become an obvious value to defend our own air space, so Germany has to do something.”

In mid-July, prior to Scholz’s speech, EU Internal Market Commissioner Thierry Breton announced a new €500 million fund to encourage European cooperation in defense matters — notably to acquire portable air defense (MANPADs), anti-tank guided missiles and artillery such as shells and the Caesar or Krab howitzers — to complement the European Defense Fund, which is aimed at R&D projects. That means that the more countries Germany gets involved with to develop air defense capabilities, the more money it could get from this fund, formally the “European Defense Industry Reinforcement through common Procurement Act” (EDIRPA). But Müllner said he didn’t think there was a link between Scholz’s announcement and EDIRPA.

The €500m fund will be available for two years (2023-2024) and can only be used to incite member states to cooperate. The European Commission will not be buying weapons itself. The fund will support joint acquisition projects by a minimum of three countries. And the more member states are involved the more financial aid they will get. Eligibility will be the same as for those of the European Defense Fund.

Discussions to approve this initiative are expected to be held by the European Parliament and the European Council (the governments) this fall.