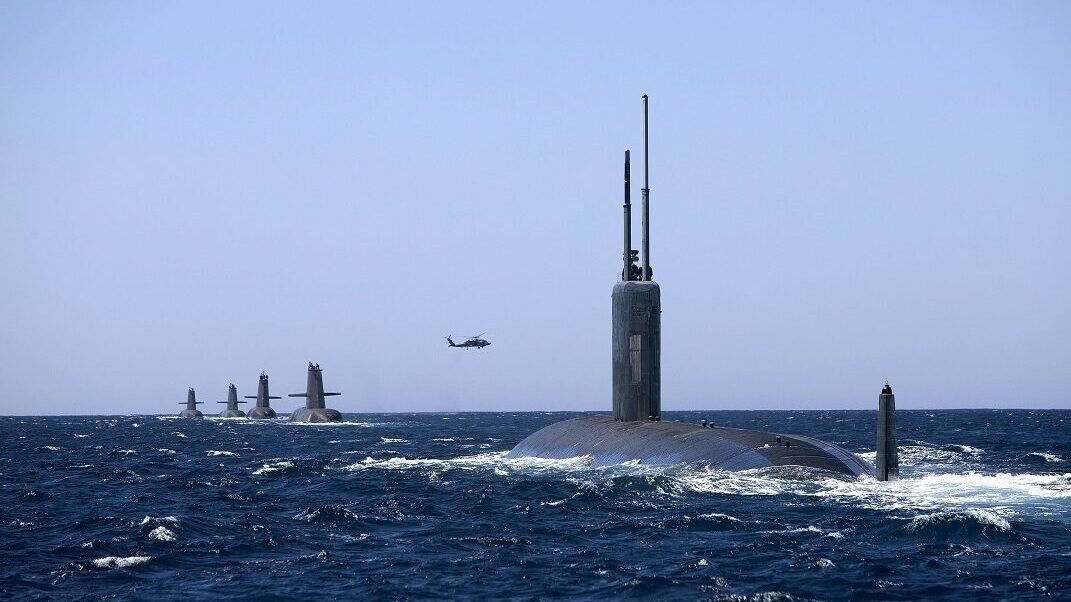 SYDNEY — A bipartisan group of influential House defense lawmakers today issued a letter to US President Joe Biden pushing back against concerns raised by the head of the Senate Armed Service Committee on whether the United States can build enough nuclear attack submarines to help Australia deploy boats in the Pacific by the 2030s.

The letter, signed by nine members of the House, states that AUKUS is “Far from a zero-sum game” when it comes to nuclear subs — a clear shot at comments made in a letter to Biden by Sen. Jack Reed, the SASC chairman, which included that specific phrase. Reed’s letter, co-written with since-retired Sen. Jim Inhofe of Oklahoma, was first revealed by Breaking Defense last week, setting off  major questions in Australia about the fate of the AUKUS agreement.

Reed and Inhofe’s concerns centered around whether the US would be able to produce enough nuclear subs to manage both domestic needs and those of Australia. The House letter, released by the office of Rep. Joe Courtrney, D-Conn., directly addresses that issue while stating unequivocally that they offer “strong support” to the idea of Australia getting nuclear subs.

Courtney, the incoming ranking member of the House Armed Services Committee seapower subcommittee, was joined on the letter by the two heads of the HASC, Reps. Mike Rogers, R-Ala., and Adam Smith, D-Wash., as well as Reps. Mike Gallagher, R-Wis., Trent Kelly, R-Miss., Donald Norcross, D-N.J., Rob Wittman, R-Va, Derek Kilmer, D-Wash and Blake Moore, R-Utah. That Rogers and Smith would sign onto the letter is especially notable, given how often the HASC and SASC leadership is aligned in public.

“While it is essential to maintain a minimum of two submarines a year for the United States to meet our national security requirements, we are supportive of expanding the industrial base to meet AUKUS expectations. We particularly believe that an expansion of our industrial base beyond two submarines would support the early provisioning of existing Virginia class submarines to be made available concurrent with the retirement of the Collins class attack submarines,” the authors said in the letter.

“These realities should not be viewed as a reason not to pursue US build submarine options in AUKUS but rather as a unique opportunity to leverage the support and resources possible under AUKUS to grow our industrial base to support both US and Australian submarine construction, recognizing that the full fruition of AUKUS over many decades will result in Australia’s ability to domestically produce nuclear-powered submarines,” they said. “This could create a strong and long-term demand signal that this and successive administrations, the Navy and industry can prepare for, should that be the outcome of this process.”

Concern about Reed’s letter spread in Australia over the weekend, to the point that Australian Prime Minister Anthony Albanese received numerous questions about it during a press event. On Monday, Reed issued a series of tweets that did not acknowledge specifically the letter, but were clearly aimed at quelling fears in Canberra.

I’m proud to support AUKUS, the United States' historic military agreement with the UK and Australia. This powerful partnership is central to ensuring a free and open Indo-Pacific, dramatically improving the capabilities of our allies, and increasing our engagement in the region.

“Importantly, AUKUS also lays the foundation for the most significant integration of our undersea and other military capabilities ever achieved. I am encouraged by the progress our nations have made,” he said in one of his messages.

The House letter addressed the main concern raised by Reed and Inhofe: that the US just can’t build enough nuclear attack subs quickly enough, and any that might go to Australia would take away from the US requirement for more than 60 subs.

Instead of subtracting from America’s nuclear sub base, the House members argue that helping Australia “could very well be a ‘rising tide that lifts all boats.”

“There is no doubt that our domestic submarine industrial base – like the larger defense industry, domestic manufacturing sector, and nearly every other sector of our national and global economy – has been strained by COVID-19 pandemic. However, this need not be a static picture in the coming decades over which AUKUS will be carried out,” the letter continues.

As the 18-month consultation period on the implementation of AUKUS nears its conclusion this Spring, Courtney and the coalition insist that now is the time to leverage the resources possible under AUKUS, and to “grow the U.S.’s industrial base even further to support both increased U.S. production and an Australian nuclear-powered submarine.”

Even with the increased funding included in the recently passed fiscal 2023 budget, “the United States Navy’s force structure drops from 50 attack submarines today to 46 in 2028 and only begins to meet the 66-attack submarine requirement in the late 2040s at the earliest.”

But they say that “These realities should not be viewed as a reason not to pursue US build submarine options in AUKUS but rather as a unique opportunity to leverage the support and resources possible under AUKUS to grow our industrial base to support both US and Australian submarine construction, recognizing that the full fruition of AUKUS over many decades will result in Australia’s ability to domestically produce nuclear-powered submarines. This could create a strong and long-term demand signal that this and successive administrations, the Navy and industry can prepare for, should that be the outcome of this process.”

US Defense Secretary Lloyd Austin has pledged to ensure Australia does not face a gap between its ageing Collins conventional subs, due for decommissioning in 2039, and the deployment of the Aussie nuclear boats. All six Collins-class submarines will have their operating life extended starting in 2026, while the new nuclear boats are expected to deploy sometime in the 2030s.

Meanwhile, Australia must grapple with building a nuclear workforce, which is virtually absent from the country, as well as teaching its labor force the highly technical skills of welding and related techniques and technologies before it can begin building its own boats, as is the long term goal of AUKUS.