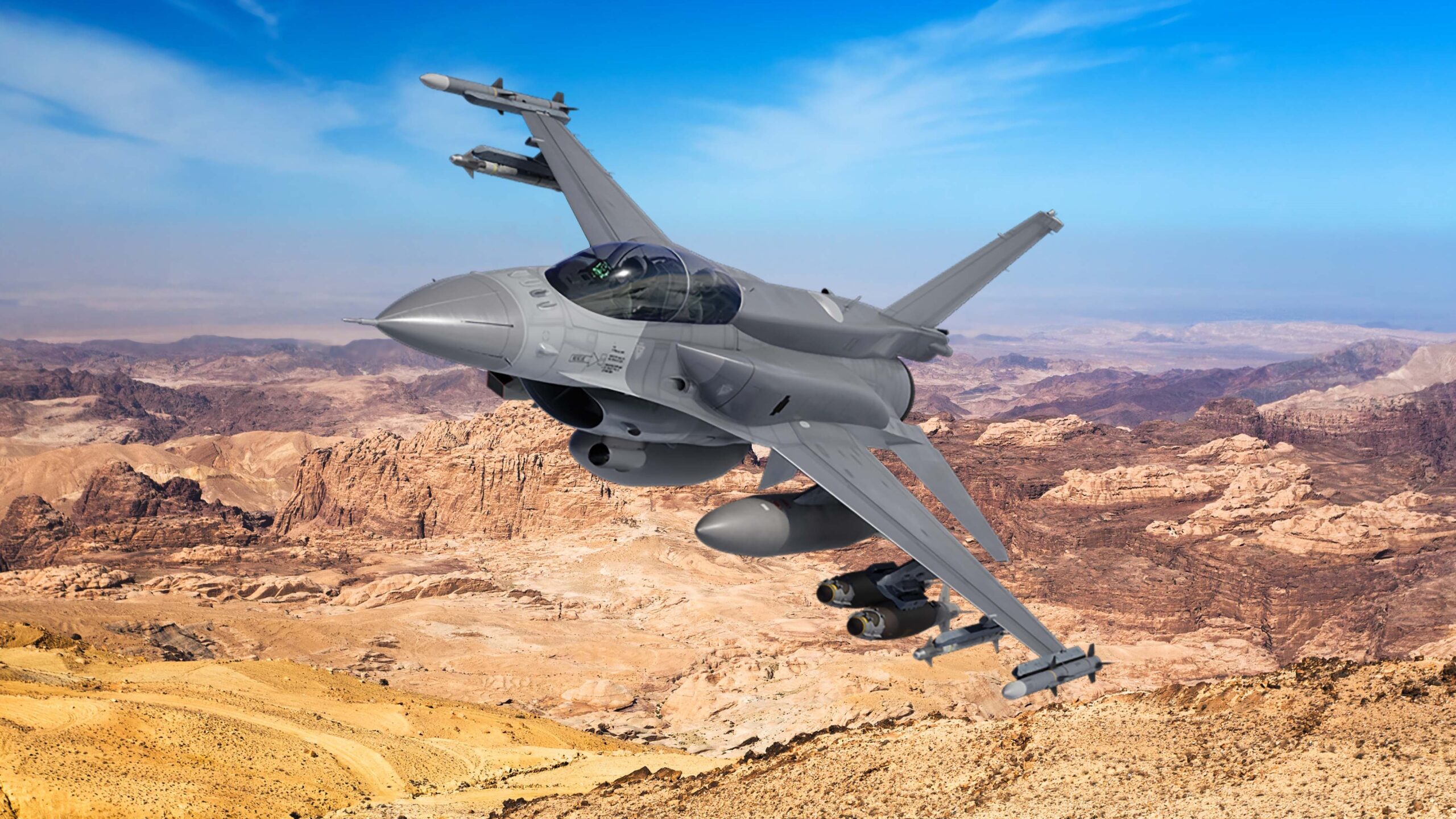 Promotional art for the F-16 Block 70 for Jordan. (Lockheed Martin.)

BEIRUT — The Royal Jordanian Air Force (RJAF) Command has signed a deal to buy 12 Block 70 F-16 fighter jets from the US in a bid to help modernize its aging air force.

According to the Jordanian statement, the deal comes within the framework of boosting defense capabilities and military deterrence, to increase the level of combat readiness. It will also strengthen joint cooperation between Jordan and the US, including in combating terrorism and enhancing stability in the region, the air force said.

In February 2022, the US State Department approved the sale of 12 F-16 fighter jets with an estimated cost of $4.21 billion — a deal that also included radios, targeting pods and associated munitions components like guided missile tail kits. But the number of fighters was reduced to eight in a letter of acceptance signed by Maj. Gen. Yousef Al-Hnaity, chief of the Jordanian armed forces, and Brig. Gen. Mohammad Hiyasat, commander of the Royal Jordanian Air Force (RJAF), as Breaking Defense previously reported, before apparently rising again. At the time, deliveries were expected to begin in 2027.

“Jordan wants the modernized Block 70s as part of a broader defense push to retain up-to-date warplanes, but also specifically because their anti-radar capabilities could in theory be useful should Jordan once more need to intervene in Syria (presumably against the resurgence of ISIS), where Syrian and Russian air defenses could pose a challenge to such missions,” Ryan Bohl, Senior Middle East and North Africa Analyst at the RANE Network told Breaking Defense.

Bohl added that in the event of a US-Iran conflict, Jordan could be pulled in, and in that case Jordanian F-16s would likely be part of a coalition targeting regional Iranian militias in Syria and Iraq.

In a statement, Aimee Burnett, vice president of F-16 Business Development at Lockheed Martin, said the company is “proud the Royal Jordanian Air Force is extending its participation in the F-16 Block 70 program. The F-16 Block 70 will extend Jordan’s existing fleet of F-16s, bringing advanced 21st Century Security capabilities to the mission combined with affordable operating and lifecycle costs. Our history partnering with Jordan strengthens regional security and helps protect citizens through cutting-edge technologies that support critical missions today and into the future.”

The F-16 is the backbone of the Royal Jordanian Air Force, which operates 43 F-16As as the primary combat aircraft and 18 F-16Bs.

Lockheed Martin’s F-16 Block 70 is gaining increased interest in the Gulf countries, as Bahrain is also under contract for the Block 70 under a $1.12 billion deal for 16 aircraft. The flight tests for Bahrain are planned to begin in early 2023. The Royal Bahraini Air Force expects to receive its first batch of four F-16 Block 70 aircraft by the first half of 2024, following a COVID-19-related delay, commander of the air force Maj. Gen. Shaikh Hamad bin Abdullah Al Khalifah told Breaking Defense in November 2022.

These new F-16s will be built in Greenville, S.C. after finalizing the contract. The production rate in Greenville is four aircraft per month.