Hoover Institution (Stanford, CA) – NATO Secretary General Jens Stoltenberg joined H. R. McMaster, the Fouad and Michelle Ajami Senior Fellow at the Hoover Institution, in an episode of Battlegrounds to discuss a broad set of policy concerns. These included Russia’s assault on Ukraine and how the transatlantic alliance has adapted to other twenty-first-century challenges such as competition from the People’s Republic of China and the impact of climate change on global geopolitics.

Stoltenberg said he is pleased with Ukrainian forces’ battlefield victories against Russia, including their recent recapture of Kherson, the southeastern port city on the west bank of the Dnieper River. These developments, he said, underscore two strategic mistakes that were made by Russian President Vladimir Putin in the lead-up to the announcement of his “special military operation” on February 24.

One, Putin underestimated the resolve of Ukraine’s society, armed forces, and political leadership in mounting a credible defense of their nation’s sovereignty. The Kremlin was confident that it could take Kyiv and install a new government there in a matter of days. The Russian army was met with stiff resistance and has gradually lost ground since Ukrainian forces began their counteroffensive this summer.

Second, Putin underestimated the NATO alliance’s ability to forge solidarity in support of Ukraine. NATO and the West at large have supported Ukraine with economic and military aid while imposing severe sanctions against Russia.

Stoltenberg warned that Russia should still not be underestimated—it has large numbers of troops and has demonstrated a capacity to keep fighting and inflict indiscriminate violence (in many instances against civilian targets), despite incurring heavy losses on the battlefield.

In countering Russia, Stoltenberg said that NATO has two major tasks: (1) help protect Ukraine’s sovereignty; and (2) prevent the war from escalating into a broader conflict.

Stoltenberg explained that NATO has increased its forward military presence on its eastern frontiers and is now on the verge of expanding its alliance (pending ratification from members Hungary and Turkey) with two historically neutral countries, Sweden and Finland.

From this perspective, Stoltenberg said, Putin made a third strategic miscalculation. For two decades, Putin’s biggest foreign policy priority was to push back NATO from Russia’s borders. But by invading Ukraine, Putin invited a larger NATO presence.

Stoltenberg said that Putin’s policy was based on the wrong assumption that, within the international order, larger countries like Russia could command a sphere of influence. Moreover, the invasion of Ukraine was in violation of the Helsinki Accords of 1975 and the Budapest Memorandum of 1994. The Kremlin was a signatory to both agreements (although the former occurred when Russia and Ukraine were part of the Soviet Union).

The Helsinki Accords held that nation-states must respect each other’s sovereignty and territorial integrity and must refrain from the threat or use of force as a means of settling disputes. In the post-Cold War Budapest Memorandum, Moscow agreed to honor Ukraine’s sovereignty in exchange for Kyiv’s commitment to denuclearize.

Stoltenberg said that NATO will continue to support Ukraine so that its forces have an advantage in the battlefield landscape prior to potential peace negotiations with Russia. He maintained that the West can’t afford for Putin to win this war because such a victory would justify the use of military aggression to achieve political goals.

Stoltenberg also explained how NATO is responding to adversaries’ gray zone operations—that is, activity that is considered below the threshold that warrants lethal retaliation. In reducing vulnerabilities from potential gray zone operations such as attacks against power grids, gas pipelines, and communications networks, alliance leadership has established resilience guidelines for its members to ensure that they can maintain reliable infrastructure and cyber defense capabilities.

Stoltenberg said that although NATO is a regional alliance, it is often forced to confront challenges with global implications. Among them are competition from China, which owns or has interests in a large scope of European critical infrastructure.

NATO demonstrated decisive action, he said, when, in 2019, it imposed restrictions on Chinese 5G communications giants Huawei and ZTE, which would otherwise have been able to gain broad and deep access to network operations and thus provide potential backdoors for Beijing for cyber espionage activity and Intellectual property theft .

China has also played a significant role in helping Russia evade sanctions through increased bilateral trade. This “partnership without limits,” forged between Putin and Chinese President Xi Jinping on the sidelines of the Beijing Winter Olympics earlier this year, is aimed at reshaping the world order in a manner that favors the interests of the two powers. Stoltenberg said that in countering this strategic partnership between two authoritarian governments, NATO has been working more closely with its Indo-Pacific partners, namely Japan, South Korea, Australia, and New Zealand.

Another daunting global challenge Stoltenberg underscored was climate change, which he called a “crisis multiplier.” More extreme weather events such as droughts and the melting of ice in the Arctic can potentially fuel competition over scarce resources and result in large migration flows of people.

Stoltenberg emphasized the need for an immediate supply of hydrocarbons in the short term, given rising energy costs in the European Union. However, he affirmed to the audience that these exigencies should be reconciled with long-term clean energy goals that, if achieved, will result in more advanced technologies and more efficient economies.

Stoltenberg concluded the interview on an optimistic note, telling McMaster that all NATO members have increased their share of military spending, and more are meeting the requirement of allocating 2 percent of their GDP for collective defense.

He also said that the transatlantic alliance is beneficial for both Europe and the United States. Russia and China, he said, don’t have a network of friends and partners like the United States does. He noted that, combined, NATO countries make up 50 percent of both global GDP and military might. 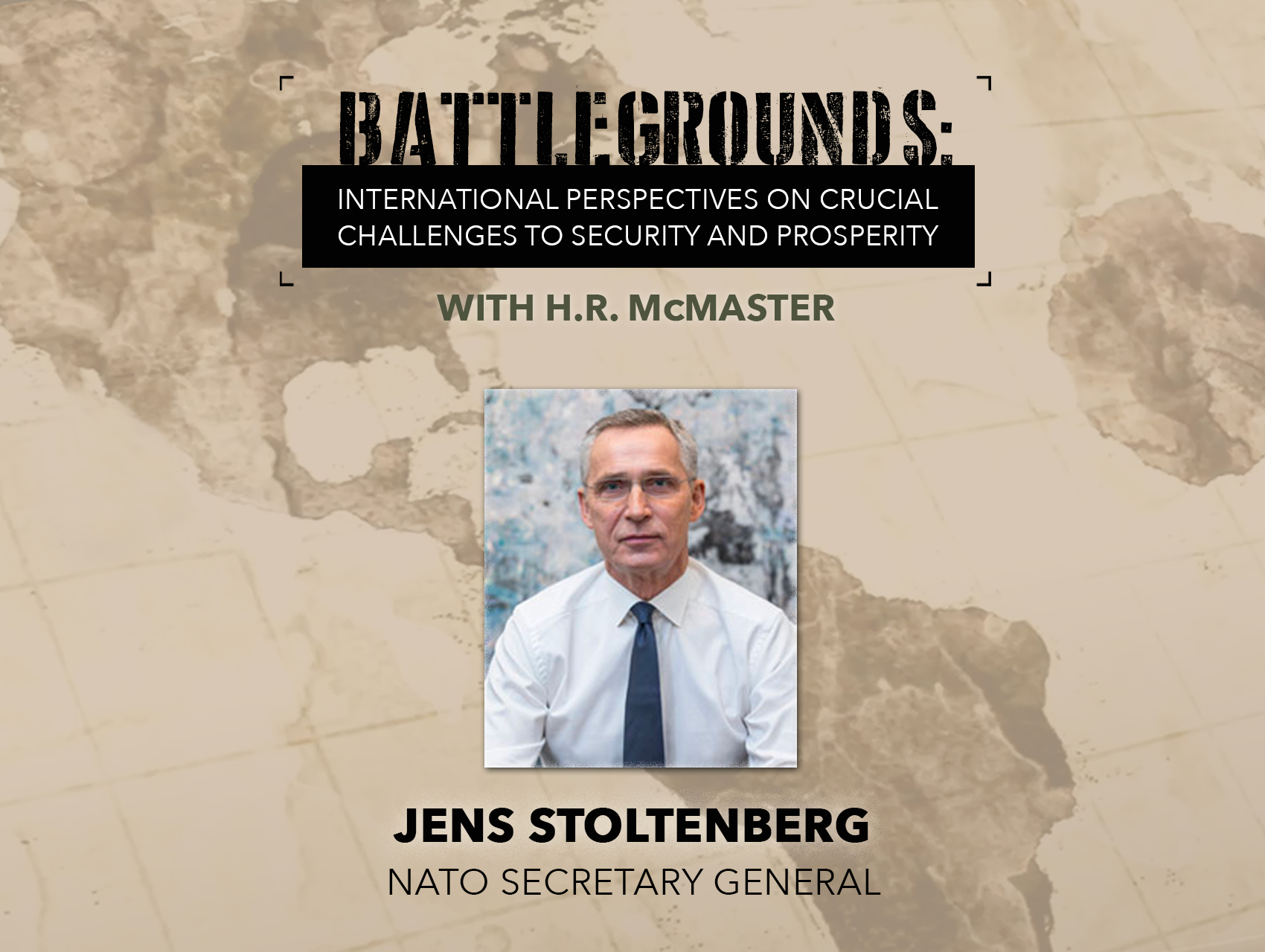