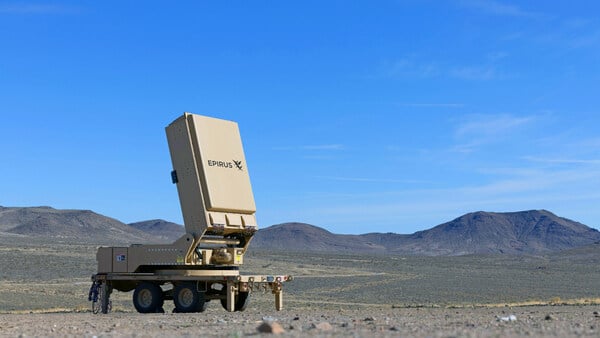 WASHINGTON — Epirus, a technology company developing directed-energy weapons, has won a $66.1 million contract to deliver four high-powered microwave prototypes to the Army for it to continue testing out against swarms of aerial drones, the firm announced today.

The company’s Leonidas system “outperformed” six other systems during various test events to win the Army’s sole-source contract for the Indirect Fire Protection Capability-High-Power Microwave (IFPC-HPM) currently managed by the Rapid Capabilities and Critical Technologies Office (RCCTO), an Epirus spokesman wrote in an email to Breaking Defense. Although the company is only under contract to deliver four of those prototypes, he noted that that figure could go up at the Army’s discretion.

“This contract with the RCCTO brings new counter-swarm capability to the [unmanned aerial system] UAS fight with our cost-effective, modular and upgradable Leonidas systems,” the company’s Chief Executive Officer Ken Bedingfield said in a press release. “As the threat environment continues to evolve, so, too, will our capabilities, ensuring the US Army is equipped with effective countermeasures to near-term and over-the-horizon electronic threats for decades to come.”

The Army did not immediately respond to questions about the contract, IFPC-HPM test plan or a future program. However, Army fiscal 2023 budget request documents provide additional details about plans to acquire an IFPC-HPM, ground-based weapon to provide fixed and semi-fixed sites with a short-range defense against swarms of group 1 and 2 aerial drones (typically weighing less than 55 pounds). More specifically, the IFPC-HPM requirement includes a high-power microwave source, power and thermal subsystem, and an antenna subsystem interoperable with a battle management command, control and communication software.

“IFPC-HPM provides much needed protection against adversarial UAS swarms capable of targeting and overwhelming US and allied air defense systems,” the Army wrote.

The Army is pursuing the weapon under an “accelerated material development and competitive prototyping” effort and said it will produce four prototypes by 2024, test them out and then transition to a program of record in 2025.

“IFPC-HPM will leverage US Air Force contracts to provide prototypes,” the Army wrote. “Soldier touchpoints will be conducted to provide feedback in support of Army requirements generation, prototype maturation, fielding residual combat capability to a unit of action, and future capability development.”

For Stryker-based DE M-SHORAD capability, the Army wants to provide soldiers with a new air defense capability to down rotary wing aircraft, aerial drones weighing less than 1,320 pounds, and rocket, artillery, and mortar threats. Kord Technologies is currently tasked with integrating the laser onto the combat vehicle, and in 2021 the Army selected Raytheon to produce the laser after Northrop Grumman dropped out.

However, weapon development hit some speed bumps in the intervening time, and last year Army officials decided to keep the weapon in development a few months longer than initially planned. But if all goes according to the new plan, the service will stand up a platoon with four vehicles early this year.

Looking down the road, though, Raytheon is not a lock for the program, and Army officials have said they plan to host a future competition for the program. Some companies have already announced plans to compete for this coveted contract including Lockheed Martin with its Directed Energy Interceptor for Maneuver Short-Range Air Defense System (DEIMOS) system. Just today, the company announced it had achieved first light from the DEIMOS system, which “verifies that the laser’s optical performance parameters align with the system design parameters.”