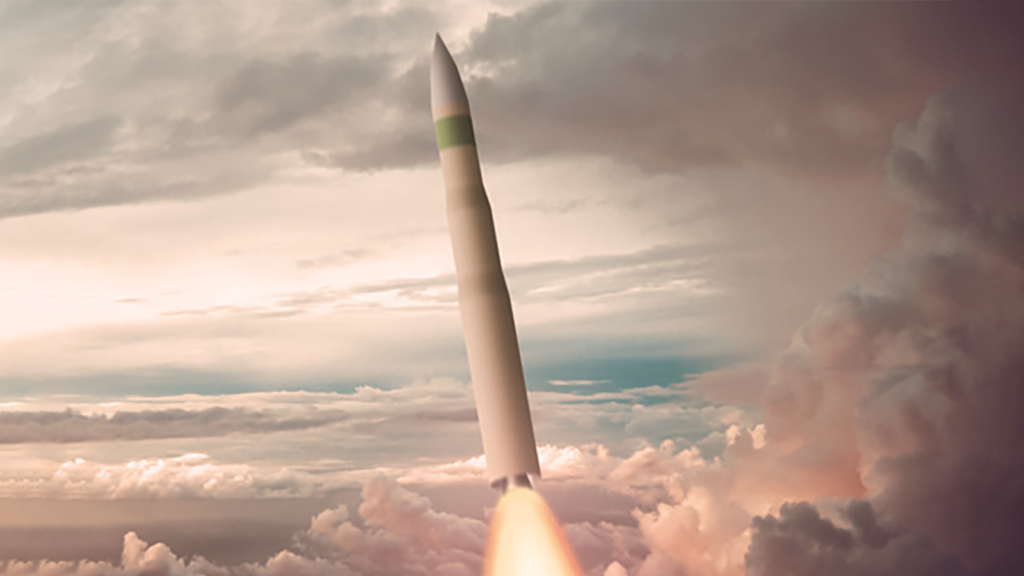 US Air Force artist’s rendering of the Sentinel in flight. (Credit: US Air Force)

WASHINGTON — The Air Force is gearing up to modernize its 450 silos housing Minuteman III intercontinental ballistic missiles to accommodate its replacement, now called Sentinel — a “major undertaking” that the service hopes can begin in the mid- to late-2020s, according to one of the Air Force’s top nuclear program officers.

Lt. Gen. James Dawkins, deputy chief of staff for strategic deterrence and nuclear integration, told the Mitchell Institute today that the scale of the silo conversion effort is something the service’s nuclear complex hasn’t seen in “over 50 or 60 years.” Not only does it involve updating outmoded computers and software, but also building new underground facilities, he explained.

“What the defense industry needs to know … is it’s, again, on a scale that we’ve not seen in  decades,” he said.

Dawkins noted that when the Minuteman silos were originally built, they were dug into empty fields and equipped with new kit. But the new effort will involve both renovation and new construction.

“We’re having to go to those sites that have already have equipment and decommission them, dig some of it away, destroy some of the facilities, and then put new facilities where those old facilities were. And so this is the challenge. If you’re going to do one per week for nine years, that’s what the average is, that’s quite a big level of work,” he said.

Maj. Gen. Michael Lutton, commander Air Force Global Strike Command’s 20th Air Force responsible for maintaining and operating the ICBM force, said that on the up side, the service and its contractor team have some recent experience that could help reduce the timeline for conversion — via a test silo built in Promontory, Utah, where Northrop Grumman has facilities related to development of the Sentinel, formerly called the Ground Based Strategic Deterrent. Northrop won the $13.3 billion contract to build GBSD in 2020. It expects to conduct its first test flight in 2023, with production of the missiles beginning in 2026, Greg Manuel, vice president of Northrop’s Strategic Deterrent Systems division told Breaking Defense back September 2021.

He further noted that the Air Force is looking at sustainment of the new missile silos in a new way that should also increase efficiency.

“The concept is not going to be executed the same way we sustain Minuteman III; i.e., we have a main base, and then you spoke out from that main base out into the missile complex. I would anticipate an effort where you’ll have smaller logistics sustainment hubs forward out in the complex,” Lutton said.

“So you’re actually cutting down the amount of time the contractors are transiting back and forth from a main base like an [Francis E. Warren AFB near Cheyenne, Wyoming] to western Nebraska or northern Colorado or eastern Montana,” he added. “Those little efficiencies I think are critical when you look at the macro scale. “